Written by Human Resources on April 29, 2019. Posted in Blog

In Singapore, Randstad’s latest Q1 Workmonitor report has revealed 72% of over 400 employees surveyed feel comfortable giving feedback to and receiving feedback from their managers.

In fact, close to three in four (73%) currently work in an open environment where feedback can be shared at any time, while 80% are able to have an open conversation with their managers during their performance review.

In addition to Singapore, the percentage of respondents in the region who work in a company with real-time feedback is as follows: 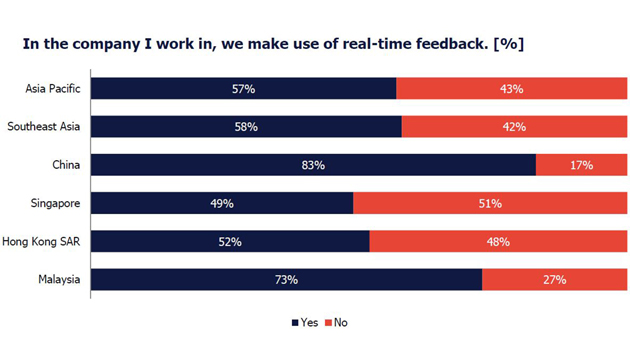 Despite this, a vast majority (88%) of respondents in Singapore still feel their performance review is used as a platform for managers to give feedback, while 15% have not had the opportunity to share about their career aspirations or concerns.

Overall, in terms of feedback channels, here’s the typical usage:

When asked about how they feel towards sharing and receiving real-time feedback as well as sitting through performance reviews, most respondents demonstrated positive experiences.

For example, 60% are positive as it gives them a clear understanding of what they need to achieve and how to do it. Close to half (49%) feel it encourages open communication, while 45% feel it helps them learn and develop. 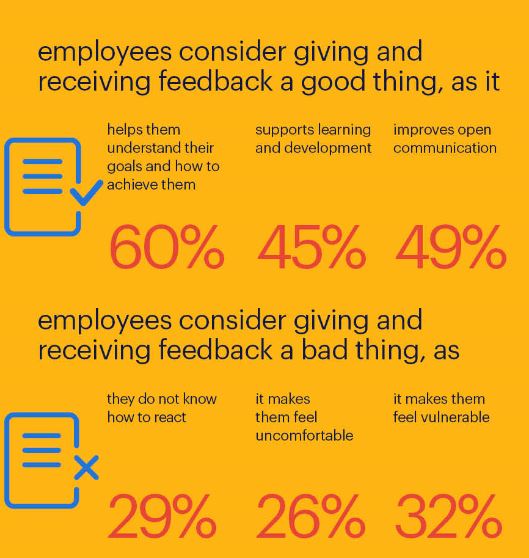 A similar response can be seen in Malaysia, where among the over 400 respondents covered, a majority (69%) of employees believe feedback gives them a clear understanding on how to achieve their goals, while 49% believe it supports learning and 52% feel it increases their motivation.

On the contrary, 34% don’t know how to react in such situations, 33% feel uncomfortable and 29% feel it can be hard not to take any negative feedback personally.

Annual performance reviews are the most popular frequency of such conversations in both Singapore (47%) and Malaysia (34%).

Lesser popular in Singapore is the half-yearly review at 19% (compared to 17% in Malaysia), while for quarterly reviews, it is used by 15% of respondents in both countries surveyed.

The percentages of respondents citing monthly, weekly, or zero performance reviews is relatively lower, except in the case of Malaysia where 22% are using monthly reviews.