Mid-level expatriate pay packages in Hong Kong have continued to climb in 2018, with the average package costing companies US$276,417. This came after a modest drop in 2017. Globally, Hong Kong dropped one place to sixth with the UK overtaking Japan as the most expensive jurisdiction for companies to send expats. Regionally, Japan retained top spot with Hong Kong coming in fourth – somewhat surprisingly behind China and India and marginally ahead of South Korea. “Salaries rose slightly by an average of just over $1500, while benefits, including extras on top of the basic salary such as school fees or transportation costs, increased by over $6000,” said Lee Quane, Regional Director (Asia) at ECA International, which conducted the MyExpatriate Market Pay Survey. “The benefits offered as part of an expat’s pay package have always been high in Hong Kong as it continues to be attractive to companies and expats alike. This high demand results in expat-level accommodation, international schooling and other costs being significantly more expensive than most other locations.” 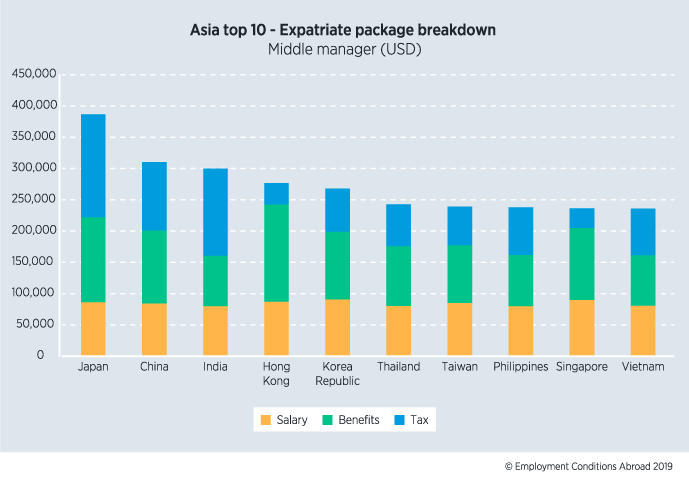 In other parts of Asia, salaries increased for expats in Singapore by an average of $4874 – the total pay package increased by more than $13000 to a total of $236,258. Singapore occupies 19th place in the 40-country list due to its low personal tax rates. “Expat pay packages in Singapore increased across the board in 2018, with salaries increasing by nearly $5000 and benefits going up $6400 on average. However, personal tax only increased minimally, and tax-related costs still remain extremely low compared to most other locations,” Quane said. “This is good news for companies with workers currently living in Singapore, though, with cash salary and benefits remaining relatively high, and taxes staying low – resulting in less expense for employers when relocating staff to the country.” Expat packages in China jumped significantly last year, after dropping in 2017, with the average package now $310,204 – an increase of more than $33,000. “The Chinese yuan experienced a better year in 2018 though and due to a stronger economy and currency, the pay package for overseas workers in Chinese locations has improved considerably,” Quane said. When considering the cost of an expat package, companies need to factor in three main components: cash salary, benefits – such as accommodation, international schools and cars – and tax.